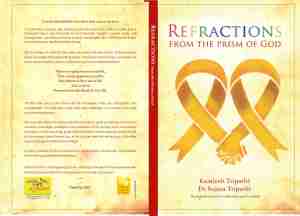 Book title: REFRACTIONS … FROM THE PRISM OF GOD– You could download the e-book from antrik.com or pothi.com for just Rs 100 or $1.50. Collections will be utilised for poor children suffering from cancer.

What goes on in a cancer patient’s mind is not known even to his near and dear ones, what to talk of anyone else. Maybe, only the invasive part is revealed, and the rest remains within the confines of the patient’s mind.

It is said about cancer, that only the ones who have seen cancer from close quarters are sensitive about it, and the rest are not. This includes cancer patients, their near and dear ones, Parents of child cancer patients, and also people who have lost their loved ones to cancer.

A normal and healthy person may not even think about cancer, forget reading about it, because your mind is clouded by a plethora of interesting things around you, where the word ‘cancer’ is somewhat uneasy and eerie. But there is still a need to communicate to the society about the incessant suffering of a cancer patient.

This book does exactly that. It communicates the mindset and sufferings of a poor, young and a three time cancer survivor Suresh from Chennai in a comforting and engrossing manner that readers would like to read. First time when Suresh got cancer he was six, and then he was okay for a decade and a half. But it struck again when he was twenty one and again when he was twenty four. All three were different types of cancer.

Suresh wanted to tell his story for the benefit of other cancer patients. Primarily, to make them understand the challenges of a young cancer patient. Where, he has his entire life in front of him in terms of his school, college, professional education, career and aging parents. When, he doesn’t even know how long he is going to survive. And in all of this he builds his determination and alters his mindset to take cancer head on.

The book has a motivational slant. That cheers you up with peppy poems and morale raising short stories, while it unfolds the grit and determination of the protagonist.

Number of cancer cases in the world, are on the rise and there is a great need to communicate the sufferings, trauma, and the challenges of a cancer patient to people in general. Also, there is need to communicate how to handle such situations, and more importantly make people realise that cancer is conquerable.

The author of this book is Kamlesh Tripathi and co-author is Dr Sujata Tripathi who had lost their younger son to brain cancer. The book is endorsed by Ms Preetha Reddy, Vice Chairman, Apollo Hospitals Group.

The book is co-published by Cankids … Kidscan and Shravan Charity Mission. Both are NGOs that work for children suffering from cancer.

The gutsy founder of ‘Cankids … Kidscan,’ is Ms Poonam Bagai who herself is a colon cancer survivor. But that has not deterred her. From taking up the noble cause of child cancer in India.

Sharvan Charity Mission is an NGO that was started by the author and the co-author in the name of their late son Shravan that also works for child cancer.

The book is available online in:

Or download an e-book from Pothi.com or Antrik.com (autobiographies)

Or you could write directly to the NGO for your copy- shravancharitymission@gmail.com

Book launch: ‘REFRACTIONS … from the Prism of God’

Cankids-Kidscan and Shravan Charity Mission, both leading NGOs that work for child cancer in India have jointly released the book titled, ‘REFRACTIONS … from the Prism of God’ on brave ‘Suresh’ a three time cancer survivor from Chennai. He was diagnosed of cancer when he six, and he comes from a poor family.

It is an inspiring story of raw guts, where Suresh has been carrying his dream to pursue PhD in cancer even after his long struggle in terms of his illness. He is always keen to encourage other young cancer patients and survivors from his own journey of life. He is an active member of Kidscan Konnect (Young cancer survivor group)

The book is setup in a motivational and positive tone that will only cheer you up, and motivate one to fight the disease, and even wade through troublesome life. It will help cancer patients, their near and dear ones, parents of child cancer patients, NGOs, Doctors and even para-medical staff and even recommended for general reading for awareness as to how one can take on cancer.

Please contact us on 9971494795 or e-mail at: shravancharitymission@gmail.com to reserve your copy.

Death! I’ll’ tell you how she looks. I saw her from close quarters; only yesterday, while returning from office. She looked like a terrifying combination of a battered vehicle with a soiled number plate and a ghostly appearing driver who vanished into thin air in a flash of a second. And, it all happened on 21st November while returning from office.

I had just crossed Noida Golf club and was approaching the next traffic light signal on the roundabout of the Metro Station where there was a long queue of traffic waiting to cross. Moving slowly, by now I was as under the Metro station building and on the extreme right lane, inching along the high road divider, so high that while being seated in the car you could not see the traffic on the other side of the road. I was at peace as the traffic was disciplined, enjoying music; and relaxing in the company of fellow cars around, mostly returning from a hard day’s of work. Ahead, of me was a silver coloured Maruti Zen. The traffic light had gone green again, is when I realized I was about two hundred feet from it, and since I was still quite behind, I knew my time to move the car will only come by the time the light goes red again.

And, rightly so the cars ahead of me started moving only when the traffic light had turned red covering the empty road left by the cars ahead of them. I also rolled my car and stopped close to the roundabout. From where conveniently I would have crossed over in the next green light. I guess I was now just about forty or fifty feet away from the traffic light at the roundabout. To my right, continued the road divider with its fancy collection of green plants giving that fresh smell and adding to the beauty of the boulevard that ended after about twenty feet where it approached the roundabout. It wasn’t dark near the roundabout as the street lights were well lit.

A couple of seconds must have passed, is when I saw the rear lights of the Zen ahead of me flash, with that typical sound of a car being locked by the electronic remote switch. I then saw a skinny man, of medium height, perhaps the driver of that car in chappals, wearing dark coloured trousers, a half sweater getting out of it and walking away. And, very soon he reached the end of the road divider, where it ended at the roundabout and disappeared. I wondered where and why?

That gave me an uncomfortable feeling when it suddenly dawned in me, where has he gone? Why has he locked the car? And what is inside the car? Remembering the electronic remote switch that he had flaunted. Hope this is not a car bomb. I asked myself in panic, just when the traffic display read forty two seconds, to go.

The fright in me had set in. There was a car right behind me, so I couldn’t have inched backward, nor I could have gone forward. I imagined, what if this junk explodes? It will take me head on. There will be no chance of a survival. And no one knows where this bloody fellow has gone? All this must have happened in just about fifteen seconds.

Ahead of the Zen was a Mahindra Scorpio and on the left of it was the recently launched Tata Zest in its sexy blue colour which I still remember. Behind me it appeared was a Maruti Alto and to my immediate left an Innova where a guy was merrily talking on his mobile.

They say the fastest thing on earth is your mind. That had begun to sound in low decibels, as if my death-knell by a locally devised Molotov cocktail placed in a car. But the other part of my mind had suddenly started moving in top gear with my report card. In a flash it displayed things, that were undone, badly done and also successfully done in my life. It had also opened my conscience, my can of worms. Who all I had cheated and who all had cheated me; and with who all I was not fair and who all were not fair to me.

I remembered all my friends, including my girl friends. Some, unfamiliar voices reminded me, how I had hurt my Parents. Then suddenly a husky voice probably the voice of death said, ‘you have not made your will. Not explained your property papers to your wife, nor to your son, nor even to your daughter-in-law. And where have you kept your insurance papers, will they be able to find it; and what about the passwords, for if you die here in this blast your passwords might also die along with you in the computer, and what about your spiritual agenda and visits to various temples that you always wanted to carry out. All that will now have to be done in your next life provided you’re born as a human being.’ I could feebly make out, all these deadly voices were coming from that God forsaken Zen. When, suddenly I felt the flash was over. But the bomb was still alive and ticking. I suddenly missed my family.

The bright screen of the traffic light now read twenty seconds, to go. It was now or never. I quickly gathered myself, picked my phone, office bag, and moved out of the car and started walking in the reverse direction of the car when the guy sitting in the Alto behind my car said,

‘Where are you going sir, the signal will be green soon. Heeding to his advice I turned around to look at the signal in extreme fear, is when I also saw the driver of the Zen walking towards his car adjusting the fork of his pants and what lay beneath. I asked in some dismay.

He smiled and raised his little finger. But I had no expressions to return.

I sat in the car and slowly moved behind the Zen. There were no traffic cops there, to whom I could have narrated this episode. For them to be cautious and on the prowl about any such planned attacks by terrorists, as traffic signals were a vulnerable point.

That day I also realized the importance of ‘Swacch Bharat Abhiyaan’ of Prime Minister Sri Narendra Modi. And, just how to relieve oneself, one can commit such idiosyncrasies; and the urgent need to construct Public loos along roadside.

Life is so weird for when I was seeing death staring at me. At only a distance of ten feet the other person in the Innova was giggling and speaking on his mobile. Perhaps, these very thin lines can only be managed by Almighty alone. And more importantly,

I am now preparing my will on fast track, and having a hard look at my checkered report card.