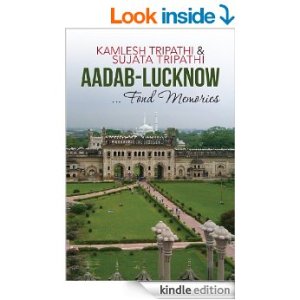 ‘whatever … whenever … Lucknow is forever.’

‘Aadab-Lucknow … fond memories’ is a story of a group of friends who spend their childhood and part of their adolescence in Lucknow. They part ways for their career and future but the umbilical-cord remains intact and they connect after many years, attempting to relive the city.’

‘What is #Lucknow up to? Smiling, giggling, laughing or weeping. Let’s figure out.’
‘Isn’t Lucknow the world’s showcase of #Hindu-Muslim amity? Do you have any doubts? We have none.’

‘Langotia-Gang: A group of ‘Underwear friends’ nay ‘childhood friends’ a metaphorical and peppy expression. The Langotians take you through the intrinsic essence of life.’

‘And post #Kabootar-bazi, dressed in a crisp Achkan, seated on his flashy Ikka, he used to join Rehman for the evening Chai-Nashtaa which he ensured, he never missed after the game. After all … All was fair in love and Kabootar-bazi.’

‘Anyway, guys send me a quick update on, Vakil, Neta, Naukarshah and Abhiyanta … Shahid, IV, Irfan and Savita. Lucknow runs because of these four; business and industry are not there and rest can go to hell.’

‘Other states carry weight as a state, but we carry only some districts as weight.’
‘Mem-sahab, Babuji, kaan laga ke dhyan se suniya Lucknow ka har bachcha kya gaa raha hai.’ (Madam, Sir, listen intently to what every child of Lucknow is singing)

‘#Awadh shrieks and shrills to the fading countenance of Wajid as she promises to herself to be in command and control of the fond memories of her Mehboob, #Wajid-Ali-Shah.’
SKU-000674302_COVERSKU-000674302_COVER