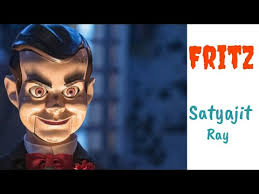 This is only an attempt to create interest in reading. We may not get the time to read all the books in our lifetime. But such reviews, talk and synopsis will at least convey what the book is all about.

This short story was published in The Penguin Book of ‘Indian GHOST stories, edited by Ruskin Bond, is about a Swiss doll named Fritz. The price of this book is Rs 250.
We all know Satyajit Ray, an Indian filmmaker, screenwriter, music composer, graphic artist, lyricist and author, widely regarded as one of the greatest filmmakers of the 20th Century. Ray was born in Calcutta into a Bengali family which was prominent in the field of arts and literature.
In this short story there are two main protagonists. One is Jayant, who works in the editorial section of a newspaper and the other is his friend Shankar, the narrator, who is a school teacher. They are great friends and have finally managed sometime to go on a holiday together. They decide to go to Bundi a small town in Rajasthan around two hundred km from Jaipur. Incidentally Jayant had been to this town in his childhood along with his parents. Jayant’s father was in the Archaeological Survey of India and that gave him the opportunity to visit many tourist locations.
They plan to stay at the Circuit House where Jayant had stayed before, when he had come along with his father many years ago on an official visit. When they reach Bundi, Shankar notices Jayant is not his usual self. He is in a pensive mood and thinking about something. Shankar tries to query Jayant about his mood. Jayant says it’s nothing but old memories inundating his mind. Shankar thinks that Jayant being the over-emotional type. Is now getting nostalgic, so he doesn’t say anything further in the matter.
They go for a stroll in the beautiful compound of the Circuit House when Jayant suddenly remembers that there was a tall Deodar tree there. He searches for it by looking around and finds it at the end of the compound. He looks at the trunk searchingly and says, it was out here he had met a European in the form of a doll, but doesn’t quite remember who it was or how they had met.
They return to the Circuit House where Jayant remembers Dilawar, the cook, who had prepared their dinner when he had come with his father. His reminiscences don’t stop there. They continue full flow and then he is inundated with the memories of Fritz. He tells Shankar, the tale of Fritz, the European doll, which Shankar hears amusedly. It was a one-foot tall Swiss doll brought from Switzerland by his uncle for him. He says he was very attached to the doll and was devastated when two stray dogs had mutilated it. He had buried the doll’s remnants under the very same deodar tree.
Shankar is quite tired so he goes to bed but wakes up abruptly in the middle of the night and finds Jayant sitting on his bed, looking perplexed. Upon asking the reason, Jayant says that something had walked over his chest when he was asleep. Shankar assures that it could have been a dream but Jayant shows him his pillow. Where, there were faint marks pointing to the fact that an animal had walked over it. Shankar does a thorough search of the place but doesn’t find any small animal like mice or rats. Shankar feels that his friend is just exaggerating his pent up emotions, nevertheless, he offers him some soothing words. After which they both go off to sleep.
The following day, they visit ‘Bundi Fort.’ About which Shankar is happy, as he remembers the famous poem of Tagore ‘The Fort of Bundi.’ During the visit to the fort on the hills, Jayant remains lost in his thoughts. After returning, Shankar queries about his state of mind persistently. Jayant says, that Fritz, the doll, had come back alive, and it was the doll last night who had walked over his chest leaving his footprints. Shankar, now annoyed with Jayant’s irrational fears, suggests to dig up the doll’s grave and see for himself that the doll isn’t back.
Jayant agrees. Together, they have the gardener dig the place where Fritz was buried. To their horror, they find a pure white, 12-inch, human skeleton, lying there exactly, of the same size as Fritz. They both are confused and horrified when they see it. Eerie thoughts and weird assumptions come to their mind. The story ends there, on a cliff-hanger, with various connotations to suit the reader.
The story is narrated in first person from Shankar’s perspective and that provides a realistic depth into Jayant’s emotions, unclouded by Jayant’s irrational fears and beliefs.
The story is built on short conversations between the two protagonists. The author within the limited space has also described the scenic surroundings quite well. Even Jayant’s childhood memories are well captured. The story unwinds on flashbacks. Where, the sequencing of flashbacks is quite perfect.
The characters are well-portrayed. Where, Jayant is projected as a serious person and even emotional. Whereas, Shankar is a smart, rational man who believes only in what he sees. Hence, he is annoyed at Jayant’s assumption that Fritz is back. And it’ll only be right to say that Shankar is quite a determined person, because even when Jayant was reluctant to dig the grave, he was sure about what he wanted to do and how to get it done.
The story is set in Bundi, Rajasthan. The author has used plain English, easy to understand. It is a good read. I would give the story seven out of ten.