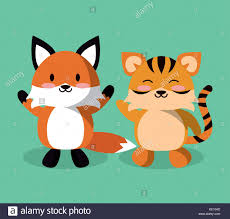 There once lived an old tiger in a forest. He could not hunt animals as he used to do when he was young. It was therefore becoming difficult for him, to get his prey. One day the tiger thought, “I have lost the strength and speed of my youth. Unless, I discover some trick to catch my prey, I will starve to death”.

After a serious thought, the tiger came out with a plan. He began by telling everyone, “I am now old. So I have turned into a vegetarian. I have become a sanyasi. I will no more hunt animals.”

Soon his words spread across the jungle. Innocent animals who were otherwise scared of him came to pay their respect to the aged tiger, thinking, that the tiger had turned into a saint. But in reality the tiger pounced on all the animals when they came to his cave.
This information fell in the ears of a fox. The fox began to think, “Can a tiger become a vegetarian, and thereby a saint?” He was now eager to unearth the truth.
Stealthily, the fox approached the tiger’s cave. He minutely and carefully examined the foot prints of the all animals that had gone to meet the tiger. He found to his dismay, all foot prints going towards the cave but not returning from the there. He then told all the animals in the forest. “The tiger is a cheat. So, don’t go to his cave as he has eaten up all the animals that went there”.
The tiger had to starve to death.
MORAL OF THE STORY: Satanic words are not to be believed.