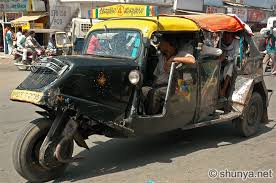 It was a gorgeous Friday morning when we came out of the university campus—bunking classes; and were in a great hurry to the board the beast that you see above—the absurd ‘tempo’ nicknamed ‘Suwar’ (pig) as it could poke its nose, anywhere and everywhere on a busy road. We were already late for the noon show, and mind you an adult one, with all those … aha … aha scenes.

With me was tall, lanky and mangy Sandy Lal— about whom, I was not sure whether he practiced Hinduism or Christianity, for he at times, visited the Church on Sundays, and with equal casualness he even swallowed the prasad of Lord Hanuman–those tasty, and as many, besan-ka-laddoos at the Hanuman temple, especially on Tuesdays, when I used to break my fast with half a kg of those. So, God, alone knew what he was, but yes there was little doubt, about his being God fearing.

Also, accompanying us was Amrish Tiwari, son of Vice Principal Tiwari, of Christ Church College, which wasn’t far from the Lucknow University campus. Amrish, a Christian with a Hindu surname, was perennially bewitched by the Bard of Avon.

The rumour around was, the initial scenes were quite explosive. So, we three were waiting quite eagerly for the next tempo, by the roadside to be on time. And, just then we saw one approaching. But I guess the guy had space only for two, he slowed down, and for a fraction of a second even halted, but seeing the three of us together, he decided to move on, and rightly so. This irked us.

We were now late for the show and therefore restless. And, as the tempo moved Amrish shot from the hip, some nicely laced Hindi ones, and seconded by kicking the side panel of the Suwar. But in the process he mildly him hurt himself.

Sandy who was behind me, felt he should do something more aggressive than Amrish, to establish his one-upmanship. So, he ran behind the tempo and using his long skinny legs tried to kick it, when his foot got stuck, in the rear fender, and he was dragged for a while after falling flat on his back. The uproar made the tempo driver to stop it.

Good heavens! By now Amrish had sprained his foot and Sandy couldn’t get up when he was stretchered to a close by clinic where we came to know he had fractured his ankle.

And with all this, the aha … aha scenes, had gone for a toss. A Chinese lunch post the movie, too, was out of question as all the money was utilised in bandage and plaster, and what was left was just enough for a quarter kg of besan-ka-laddoos, from the close by Hanuman temple which we all shared.

I realised, bunking college always doesn’t take you where you want to be. And, if you try and hurt someone, it will have an equal and opposite reaction, just as Newton’s third law of motion, but God forbid, if you compete in hurting someone, there could be a double whammy, like Sandy.