I was once on a day train from Chennai to Madurai with two of my colleagues. It was a non-ac compartment where we were having a heated debate on some business issues; is when an elderly looking blind beggar walked in with goggles. He was spearheaded by a young boy holding his hands. He started imploring for some alms in Tamil and refused to budge.

With his unwanted presence around us, I felt our important discussions was getting derailed so I quickly searched my valet where the lowest denomination that I could find was a twenty rupee note which I pulled out and gave it to him. My junior colleagues looked at me wonderstruck at the gesture. And, almost immediately the beggar moved out of the cabin, perhaps fearing I may have a change of heart. 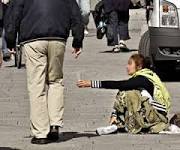 And hour had passed and we all were resting after the heated discussion when my colleague went out of the compartment, I guess to the loo. After a little while he entered and by then the train was slowing down as we were in the outskirts of Madurai. He requested me to come out of the compartment. I asked why? He didn’t reply and started moving towards the other end of the bogie. I followed him. He crossed the vestibule and just stood there and I was right behind him when I couldn’t believe my eyes.

The beggar had taken off his goggles and was counting the money that he had earned from us and the young boy was sitting next to him having a hot cup of coffee.

We had little choice, but to laugh realizing, even beggary didn’t have ethics.