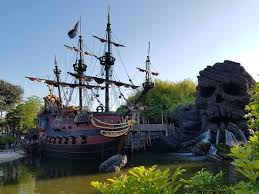 The ship rolled on the placid waters of the Devils Strait. It was growing dark. The rosy, post glow of the sunset had long since disappeared. The ship guided by a mysterious light was steering cautiously. Then suddenly, there was a deafening sound, as if all hell broke lose. A rocky under water reef had ripped open the frigate that disappeared into the Davy’s Locker. Seething and hissing foam was all that remained behind. No one had survived except for a weather beaten, rugged faced sailor.  He was aghast at what had occurred. His immediate worry was survival as he held on to some flotsam for dear life.

He tried to peer into the darkness but failed to find his bearings but on a hunch swam in the direction to his right. He didn’t know how long he had been in water but was washed ashore tired, almost in a state of delirium. When, dawn broke. Jason (the shipwrecked sailor) woke up rubbing his eyes. Slowly, he recalled the incident and looked in the direction of the vanished ship. He felt a small pack on his back. Opening it he saw a small bottle of water and some victuals. Almost famished he lost no time in gobbling up whatever there was and thereafter took to exploring what appeared to be a small island.

Apart from the incessant chattering of birds, scared looks of some scurrying rabbits and a passing mongoose there was very little wild life. Suddenly he stopped in his tracks. Right in a glade ahead, there stood a quaint little villa. He ventured in and was greeted by a liveried servitor who lost no time in taking him to his master.

The master: “So you have come!”

Jason: “Have you been expecting me?”

The Master:  “As a matter of fact, yes. That eerie light you saw from the ship was simply to lure you chaps. I am sorry about that small liner or frigate as you call it. By the way I am Sir Drax.”

Jason: “You mean the famous big game hunter who disappeared from the scene a few years ago.”

The Master:  “I am flattered that you recognized me. But I would have wished under happier circumstances.”

The Master: “Years ago I had realized that animal is no match for a man’s intelligence. I decided that I would rather hunt man and so I devised a game. I will give my quarry provisions for twelve hours and give him a start of two hours in which to hide in the island. I will start the hunt with my dogs. In case I fail to hunt him down within twelve hours he becomes the master of the island.”

Jason: “That is not fair. You have your dogs, the island is known to you.”

The Master:  “But do you not see the prize that awaits you at the end of it should you win.”

Jason: “How many have won?”

The Master: ”None or else I wouldn’t be here. Now without wasting time I will ask you to start playing the hunted.” He nodded towards the servant who immediately brought the provisions.

Jason: “But I will need a few more things-a small knife, a bed sheet for making a comfortable bed and a bottle of whisky that serves me both as an antiseptic and refreshing drink.”

The Master thought for a moment and replied: “Take whatever you need, but the time for the hunt will not change” Jason was handed the things he wanted.

Jason was soon on his way and after having covered a hundred yards or so he completely undressed himself and improvised an overall from the bed sheet. His own clothes he threw across the trails in different directions. He collected wild lichens, bitter fruits and some chilly looking fruits. After grinding them he threw them further down the trail in different directions to throw the dogs off the scent. Then he made use of the knife by whittling down dry twigs and small branches to fashion out a Malay Trap of sorts.

The hunt was now on. Sir Drax started off with his dogs on leash and two double-barrelled rifles. With plenty of ammunition in his hunting jacket, that he had once worn, while hunting wild games in Africa. The dogs hit the false scent planted by Jason. One was snared partly by the Trap. The hunt wore on. Sir Drax was looking worried. His bravado and arrogance appeared to be ebbing.

Another dawn was unfolding. Jason was making a hearty breakfast of bananas, wild fruits and coconut. The hunt was over.

Jason had not slept in a more comfortable bed in the last fifteen days.

NOTE: OBVIOUSLY JASON HAD WON. BUT IT WOULD BE A GOOD PLOY TO LET THE AUDIENCE/LISTENER WORK OUT THE ANSWER.

Moral: even when the chips are down and situation is entirely hopeless one should have his wits about him like Jason did.

Shravan Charity Mission is an NGO that works for poor children suffering from life threatening diseases especially cancer. Should you wish to donate for the cause. The bank details are given below:

Just as terrorism—Help, too, doesn’t have a religion. It can come from any corner. But unlike terrorism, that kills. Timely help sustains life. I had once gone to a hospital in Delhi. To meet parents of some poor young children who were suffering from cancer. The drill was to provide them with direct financial support, for treatment.

In all we had met about ten children and their parents in the hospital. Our NGO decided to support three out of them. Based on, certain illness criticalities, doctor’s recommendation and the budget available with us. Out of the three. One child happened to be from Sopore in J&K. His name was Abdul. His father’s name was Fareed. Who, happened to be a small-time shopkeeper with a paltry livelihood. Abdul was suffering from cancer for the last one year. And, during that period Fareed had exhausted all his savings. Although, he had received timely aid from the government. But that too had been gradually spent. Slowly the resources were receding, while the treatment was still in full flow.

When I met this bright child Abdul. I found him in an animated mood. As he was talking to his mother in Sopore over phone. He had come to Delhi for treatment without her. I spent some time understanding the challenges of Fareed. Then decided to give him the good news of our supporting his son’s treatment. Up to a certain level. But he didn’t sound enthused about it.

First, I thought he hasn’t understood me. So, I repeated what I had told him earlier. This time I spoke in Hindi. But still his reaction was not at all cheerful. I then specifically enquired, if he had understood what I had said. To which he gave me this shocking reply. ‘Janab, I have understood what you’ve said. You want to pay for my son’s treatment. But yours is a Hindu NGO. So, how can I accept money from your Trust. That too for my son’s treatment? It might not cure him at all, and Allah won’t spare me.’

For a moment I was shocked. I didn’t know how to react. Does religion lay down crude boundaries at such junctures? I thought dismally. But without being deterred. I opened my bag and wrote a cheque, and handed it over to him.

He held the cheque and looked at it morosely. I patted his back a couple of times. When his eyes went moist. Perhaps, he was at a break point. Where, on one end, was the health of his son and the mounting expenses because of that, and on the other, were his own self created radical diktats. Which, he was trying to blame it upon his religion.

I said, ‘Fareed Bhai this cheque is neither Hindu nor Muslim. It’s only a piece of paper from Upparwala, for your son. So utilize it.’ And then I moved out.

After the episode. A couple of months had passed. But that cheque never came to our account for debit. It was only when the cheque was about to expire. I received a text message from the bank debiting it to our account.

And upon reading the text message. I felt nice. Not because Hindu money had helped a Muslim. But, because Abdul had realized. That help has no religion or face. It is infinite and can come from any corner of the world. And it is absolutely divine to take help. But the source has to be right.

It is a true story. Names and location are fictitious.

It was just the other day when we had bumped into each other, as old chums after many years, clearly not knowing what had kept us away all this while; but, having, met, as if destined, I thought we would relish, cherish and take it to our graves- the friendship.

And, for some good period of time our friendship continued in all its serenading tone and tenor, and splendidly much more in spirits, where we often exchanged notes on what all had happened in our lives, to what was happening now, and, also, what all could happen in times to come. And, ergo, one felt so very blissed and blessed, at this divine happenstance, as if arising, straight out of the God’s chest. For, it had somewhat stoked my life with some artistic and energizing hue, and if not mistaken, I could possibly say the same for my friend too. We were now in good touch and nick and often exchanged notes on various issues confronting our lives.

And, then, one day, I did not receive any communication from this friend of mine, and thereafter for a couple of days. I thought my friend might be busy with work and engagements. I tried to contact but there was no reply, and I don’t know why. Time, since then has trickled and continues to trickle, yet there has been no contact between us.

But, in all of this what was wondrously intriguing was the long ‘silence,’ of my friend; that conveyed more, than it hid. So then, ‘learn to respect the “silence” without questioning why?’ is what I told myself, while preparing to move out, but with a hope that one day again, we may bump into each when the deafening ‘silence’ gets over.