In the early stages of independent India. Nothing else mattered than the sweet hangover of the freedom struggle and the newly formed Bharat Mata. That wheeled Pandit Nehru to rule for almost 17 years, as the longest serving Prime Minister (15.8.47 to May 1964). During his tenure the literacy rate rose from 12% to around 25%. The major event that shook India then was the Chinese aggression in the year 1962.

India was an unquestioning country then. Just rising from the dust of the long colonial rule. And during that period, there was little or no political resistance to the Indian National Congress. That had spearheaded the freedom movement, and most iconic political leaders that mattered then were from this party.

After Pandit Nehru expired post India-China aggression in 1964 the vacancy was filled in by another firebrand Congress leader Lal Bahadur Shastri. Who, served the country only for around 19 months and expired in Tashkent, part of the erstwhile USSR and today’s Uzbekistan.

After Shastri’s sad demise. The mantel was adorned by Nehru’s daughter Indira Gandhi. Who, ruled for eleven years from 1966-1977. The three major events during her tenure, happened to be the liberation of East Pakistan and creation of Bangla Desh in 1971 followed by a full blown battle with Pakistan in the same year and declaration of emergency for the third time in India, and this time for internal reasons. Indira Gandhi started at an average literacy rate of around 32% in 1966 but in 1977 when Congress lost, the literacy rate had crept up to around 40%. It was for the first time Congress had gone out of power since independence. And in a manner it took literacy rate to jump by 28% (12% to 40%) to throw out a long standing ruling party at the centre. This goes to prove that literacy rate one way or the other increases the political appetite of the citizenry.

In the Indian scenario increase in literacy rate has made voters change their minds. That has demanded for a dispensation of a different nature to govern the country. Indira Gandhi had imposed ‘emergency’ in the year 1975 when the average literacy rate was around 40%. This made her lose the general elections and gave entry to the first non-Congress government headed by Morarji Desai in 1977.

When the average literacy rate of India was around 30%. India could see. In some states, certain state and regional parties gaining ground such as the Dravidian parties that have dominated since 1967. DMK routed Congress in 1967 and in 1972 MGR split DMK into AIDMK. Such incidents clearly dawned an era of new politics.

Some states of India, such as Kerala and Tamil Nadu have always been ahead of the average Indian literacy rate. In the 2011 census as against the average literacy rate of 74%, Kerala was at 94, Tamilnadu at 80%, Maharastra at 82% and the big laggard states were Bihar at 62%, Jharkhand 66%, AP 67% Rajasthan 66% and UP 68%

Bihar witnessed JP movement when the literary rate was between 35-40% and Lalu became the Chief Minister of Bihar in 1984 when the literary rate of Bihar was > 45%. In U.P. Mulayam Singh became the chief minister in 1991 and Mayawati in 1995 when the state literacy rate had crossed 45%. Signalling, the thinking minds wanted a change from two national parties, Congress and the BJP. In West Bengal too Congress ruled till 1977 but when the Bengal literacy rate rose to around 40% it was taken over by the Communist rule. And when literacy rate went passed 52% the voters even rejected Communist Party that was getting irrelevant and pulled out Trinamul Congress from the stable of Congress.

The literacy rate map below shows how certain states maintain their lead in literacy rates. Where, one would find a distinct differentiation within the political set ups of states such as Kerala and Maharastra with that of Bihar and Jharkhand. 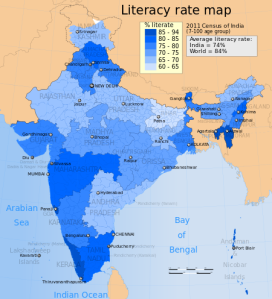 INDIA WHEN ABOVE 64% AVERAGE LITERACY RATE

India decided to open up when the literacy rate had gone past 52% in the year 1991 when wide spread reforms were announced. And, as the literacy rate went up, ethics in politics came down. Perhaps, thinking minds made politics much more competitive- resting on the theory of ‘survival of the fittest.’

Beyond 2001 when the average literacy rate had just crossed 64%. India saw a sea change in terms of, all the four estates. To begin with the first estate (clergy) now tampers with politics without fear. Second estate (Bureaucracy) has become irresponsible, subservient, corrupt and even callous towards the general public. Third estate (Commoners) is perennially pained but have become more knowledgeable and demanding. And the fourth estate (Press and Media) have become all powerful. Yet they remain the saving grace of modern India

At 74%, politics of India doesn’t remain the same and is deluged by the heft of thinking minds. For in the recent past it attracted grandstanding of agitations, like ‘India against Corruption’ where revered activist like Anna Hazare had to take the centre stage.

Besides, even the mind space of an Indian voter has got more and more complex. Because of which we could see for the first time. A political leader of the stature of Narendra Modi, to create space in voters mind traveled 3 lac km across 25 states, addressed 473 big public rallies with 5827 public interfaces, including Chai pe charcha and 3D broadcasts. More so. BJP fought more under the banner of Narendra Modi than BJP, like presidential election. In Delhi elections we saw AAP party following the new ‘volunteer’ cult to create tailor made space in voter’s mind that wiped out BJP and Congress. In J&K also it was a star struck and out-of-the-box variety of a political campaign. It was an expensive opportunity that forced BJP to abandon relevant political-IZMS just to form the government.

As we move towards 100% literacy. The route to State Assembly and Parliament will become more and more arduous. Political Parties will have to change their tone and tenor to address 100% literacy in all their political communication and behaviour. Where, corruption, scams and VVIPSM will have no place. What will simply matter is performance. This indeed will effect hoodwinkers under the garb of individual politicians.