As a professor of philosophy he drew enough polemics while he traveled throughout India during 1960s as a public speaker. And his outspokenness and out-of-turn criticism of politicians and the political mind space, that included Mahatma Gandhi and the institutionalized religion made him controversial of the irreparable sort. And the legacy goes on even after his death. But this time the Osho International Foundation has crossed the holy Laxman Rekha as this is what they wrote in #The speaking tree on February 7th 2015.

‘Why Politicians Create Chaos In The Country

‘Freedom came to India very suddenly, without any preparation. All the so called leaders were only efficient in creating a little bit of chaos here and there, and when freedom came they were absolutely at a loss as to what to do because all their efficiency was in creating chaos.

So even though freedom did come, those leaders still know only one thing; how to create chaos. They go on doing the same. And those leaders know perfectly well that the only way to be in power is to go on creating chaos. The whole concern of those who are in power is to remain in power, and they can only remain in power if the country remains in chaos. So people go on fighting and they go on managing somehow, proving to the world that they are very much needed, otherwise the country will fall apart. And the interest of the people who are not in power is also in creating chaos because that is the only way to come back into power or to come into power.’ 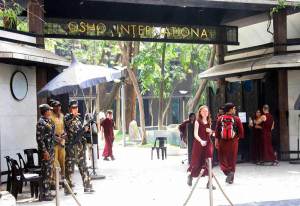 While the column targets the Indian Politicians and rulers. The first paragraph cited above, targets even the freedom fighters of India. Perhaps, the author tried to continue moving in the shoes of Chandra Mohan Jain alias Bhagwan Shree Rajneesh alias Osho without realizing the battle for freedom had started way back in 1857 with the 1st mutiny, and so, to say “freedom came to India very suddenly, without any preparation. All the so-called leaders were only efficient in creating a little bit of chaos here and there, and when freedom came they were absolutely at a loss as to what to do because all their efficiency was in creating chaos” is completely wrong and ill willed.

Secondly, freedom struggle and gaining of Independence was not the brain child of any single Politician. Rather, it was the aspiration of approximately 30-35 crore Indians that was ably driven by father of the nation Mahatma Gandhi, together with Jawaharlal Nehru, Sardar Patel to name a few, and many more freedom fighters who even died for the cause of Independent India.

And, moreover the first breed of Politicians, were actually freedom-fighters who definitely did not want chaos for the nation; and took up to the role of Politicians only to steer India out of the woods and therefore to paint freedom fighters with same brush as Politicians is criminal.

Self-styled Gurus and foundations, who have hallucinated all their lives about love and sex, should be well advised not to touch upon certain hallow chords of the nation which are beyond them, and especially for a foundation that has a sobriquet of “sex guru.”

For make no mistake Freedom-Fighters are above any self-styled God-man; so please watch out.