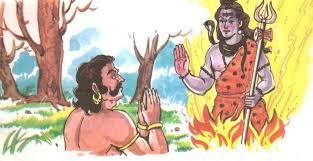 Once an asura with his marathon tapasya and devotion was able to please Lord Shiva and in return obtain from him the powerful ‘vardan’ to burn anyone to ashes the moment he placed his hand on his head. He therefore came to be known as Bhasmasur that is Bhasma-asura, for he could reduce anyone to ashes by his touch.

Bhasmasur was indeed delighted by this vardan of Shiva. So he decided to try out, his newly acquired power, on Shiva himself. When Shiva learnt of this intention of Bhasmasur he fled in terror and sought the help of Lord Vishnu, who transformed himself into Mohini the apsara to distract Bhasmasur. Overwhelmed by lust, Bhasmasur begged Mohini to marry him. Mohini agreed but laid down a condition that only if Bhasmasur could dance like her. Bhasmasur agreed to her condition. During the course of the dance, Mohini touched her head. The deluded Bhasmasur, blinded by desire, copied her, and he put his hand on his head too, and was burnt to ashes, much to the delight of Shiva.

Moral of the Story: Think before you empower a person with something, whether the person will be able to handle the power or not. Use your brains if you need to copy something and often the wrong man teaches you the right lesson.

(Published in February 2020. The book is a collection of eight short stories. It is available in Amazon, Flipkart and Notion Press)