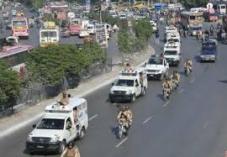 Novels and movies are the best mirror of times for they often spill the beans, whereas, history can be contrived and VVIPISM most certainly, imposed.

Nothing has changed. In this scathing and zipping novel ‘Burmese Days’ written by George Orwell way back in 1934, Indians and Burmese are referred as niggers and beggars in some pages: and thus denied membership in a local European club in Upper Burma.

To come to think of it, what has changed in India, even now? Earlier the Britishers used to keep Indians at an arm’s length, today the VVIP Indians do the same. For you still have special roads and parking areas, grand lounges, devoted policemen, z-class security and even muscle power for the VVIPS. The list doesn’t end there. For you also have several allowances in terms of free passes and tickets and subsidies only for the VIP race. The only difference is, we are not referred as niggers or beggars anymore but as Aam Aadmi.

The book mentions that in British regime when an illiterate domestic servant used to misbehave he was sent to a prison with a chit—15 lashes. And today many VVIPs continue to do the same in the event of dissent.

Perhaps, there was an opportunity for this great writer to write another book on India after the British Imperialism on Indian VVIPISM titled “Indian Days.’ But sad, he is no more.

In the ‘QUOTE-UNQUOTE’ below there is peace 1 and peace 2 that tells the unkind ways in which many Britishers thought about Asians. But since 1934 Indians have moved on and so will the Aam Aadmi of India.

“The old type of servant is disappearing,” agreed Mr. Macgregor. “In my young days, when one’s butler was disrespectful, one sent him along to the jail with a chit saying ‘Please give the bearer fifteen lashes’. Ah well, eheu gugaces! Those days are gone forever, I am afraid.”

“Ah, you’re about right there,” said Westfield in his gloomy way. “This country’ll never be fit to live in again. British Raj is finished if you ask me. Lost Dominion and all that. Time we cleared out of it.”

Whereat there was a murmur of agreement from everyone in the room, even from Flory, notoriously a Bolshie in his opinions, even from young Maxwell, who had been barely three years in the country. No Anglo-Indian will ever deny that India is going to the dogs, or ever has denied it—for India, like Punch, never was what it was.

Ellis had meanwhile unpinned the offending notice from behind Mr. Macgregor’s back, and he now held it out to him, saying in his sour way:

“Here, Macgregor, we’ve read this notice, and we all think this idea of electing a native to the club is absolute—–“ Ellis was going to have said ‘absolute balls’, but he remembered Mrs. Lackersteen’s presence and checked himself—“ is absolutely uncalled for. After all, this Club is a place where we come to enjoy ourselves, and we don’t want natives poking about in here. We like to think there’s still one place where we’re free of them. The others all agree with me absolutely.”

He looked around at others. “Hear, hear!” said Mr. Lackersteen gruffly. He knew that his wife would guess that he had been drinking, and he felt that a display of sound sentiment would excuse him.

Mr. Macgregor took the notice with a smile. He saw the ‘B.F.’ pencilled against his name, and privately he thought Ellis’s manner very disrespectful, but he turned the matter off with a joke. He took as great pains to be a good fellow at the Club as he did to keep up his dignity during office hours. “I gather,” he said, “that our friend Ellis does not welcome the society of—ah—his Aryan brother?”

“No, I do not,” said Ellis tartly. “Nor my Mongolian brother, I don’t like niggers, to put it in one word.”

Mr Macgregor stiffened at the word ‘nigger’, which is discountenanced in India. He had no prejudice against Orientals; indeed he was deeply fond of them. Provided they were given no freedom he thought them the most charming people alive. It always pained him to see them wantonly insulted.

“Is it quite playing the game,” he said stiffly, “to call these people niggers—a term they very naturally resent—when they are obviously nothing of the kind? The Burmese are Mongolians, the Indians are Aryans or Dravidians, and all of them are quite distinct—-“

“Oh, rot that!” said Ellis, who was not all awed by Mr. Macgregor’s official status. “Call them niggers or Aryans or what you like. What I’m saying is that we don’t want to see any black hides in this Club. If you put it to the vote you’ll find we’re against it to a man—unless Flory wants his dear pal Veraswami,” he added.

“It’s all very well,” grumbled Ellis, with his forearms on the table, fidgeting with his glass. The dispute with Mr. Macgregor had made him restless again. “It’s all very well, but I stick to what I said. No natives in this Club! It’s by constantly giving way over small things like that that we’ve ruined the Empire. This country’s only rotten with sedition because we’ve been too soft with them. The only possible policy is to treat ‘em like the dirt they are. This is a critical moment, and we want every bit of prestige we can get. We’ve got to hang together and say, ‘We are the masters, and you beggars—‘ “ Ellis pressed his small thumb down as though flattening a grub—“ ‘you beggars keep your place!’”

India belongs to we the VVIP and the rest can go to hell by drowning themselves in the sufficiently large Arabian sea or the Bay of Bengal, and for the rest who can’t reach there umpteen rivers are there or climb atop those lofty mountains or any sky-scraper and jump from there, for there is no place for NON-VIPS in India anymore. This is what the meek India is coaxed to feel by the arrogant India, shamelessly, personified by these VVIPs in flesh and blood. This VVIP class (Politicians-Bureaucrats-Judiciary) is not even 1% of the Indian population; but in the manner 1% of the world’s population controls 48% of the world’s wealth, these VVIP’s too control the entire India.

Perhaps, some of these VVIPs must also be feeling that Mahatma Gandhi, our father of the nation was perhaps an idiot, to have travelled third class and roamed in loin cloth, to live a life of simplicity; which we are not. And, so grab everything out, of the frail guts of this cattle class, of meek India.

And, for the meek India, Maharajas of the ancient India or Viceroys of the colonial British Raj, as if had never left but only got swapped by the arrogant India. Today, arrogant India very blatantly exploits the meek India by the sledgehammer of VVIP-ISM; by blocking roads for endless hours, taking their vehicles right up to the tarmac where their aircrafts are parked, by having separate lanes for themselves and also insulting senior citizens, differently abled persons and children who are made to stand in long queues while they walk in at the last moment by-passing security cordons, with their gun toting security guards. They delay lacs and lacs of workers going to office and factories by their stupid traffic movement and then talk of industrial output. They kill patients in ambulances by halting ambulances and then talk of health.

In the British Raj, in many cities of India there were some roads and lanes, where Indians could not enter during certain hours (such as main roads and mall roads in many cities) and pitifully we find the same atrocious culture seeping back to haunt the meek India in a more aggressive manner, just to satisfy arrogant India’s egos.

Today, meek India is standing at a crowded crossroad, not knowing which way to go and whom to look at, as all look to be the same, and in the process is losing faith in the institution of democracy that comes through the windows of these elected representatives of political parties and their cahoots in bureaucracy and even the judiciary. For starting from Congress that invented the VVIP-ISM post British Raj; today even BJP sings the same tune after having promised to go the other way, and who knows, tomorrow AAP that started primarily on anti- corruption an anti- VIP culture too may get lured to VVIP-ISM.

And what is more mystifying is the posture in which ‘arrogant India’ approaches ‘meek India’ with folded hands with a promise to serve as a dutiful ‘Public Servant’ thereby exploiting the simplicity of the meek India and once they are elected they show their real ugly face and feudal mindset.

They do everything under the sun to justify the VVIP-ISM- the hateful Lal Batti culture. They operate like parasites on hard earned tax payer’s money and refuse to reform themselves. They inculcate venomous values in their children too and would never bury the skeleton of being called the lord and master.

So what did ‘meek India’ get post-independence? They got Bapu’s- third class, his loin cloth and above all his simplicity and values; and the arrogant class? Well they became the modern day Maharajas and didn’t let the Britishers leave India in the real sense.