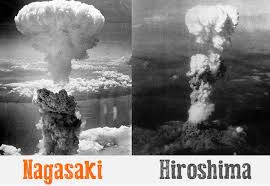 The United States dropped atomic bombs on the Japanese cities of Hiroshima and Nagasaki in August 1945 only to hasten the end of the World War II in the Pacific. Although, it was the first, and to date the only, actual use of such weapons of “mass destruction,” the mushroom clouds have hung over every military and political policy since then.

Less than five months after the sneak attack by the Japanese on Pearl Harbour, in Hawaii the Americans launched a small carrier-based bomber raid against Tokyo. While the attack was good for the American morale, it accomplished little other than to demonstrate to the Japanese that their shores were not invulnerable. Later in the war, U.S. bombers were able to attack the Japanese home islands from bases in China, but it was not until late 1944 that the United States could mount a sustained bombing campaign.

Because of the distance to Japan, American bombers could not reach the targets and safely return to friendly bases in the Pacific until the island-hopping campaign had captured the Northern Mariana Islands located in (Western north pacific islands). From bases on the Mariana Islands, long-range Boeing B-29 Super-fortresses conducted high altitude bombing runs on November 24, 1944. On March 9, 1945, an armada of 234 B-29s descended to less than 7,000 feet and dropped 1,667 tons of incendiaries on Tokyo. By the time the fire storm finally abated, a sixteen-square-mile corridor that had contained a quarter million homes was in ashes, and more than 80,000 Japanese, mostly civilians, lay dead. Only the Allied fire-bombing of Dresden, in East Germany, the previous month, had killed 135,000, people that exceeded the destruction of the Tokyo raid.

Both Tokyo and Dresden were primarily civilian rather than military targets. Prior to World War II, international law regarded the bombing of civilians as illegal and barbaric. But after several years of warfare, however, neither the Allies nor the Axis distinguished between military and civilian air targets. Interestingly, while a pilot could drop tons of explosives and firebombs on civilian cities, an infantryman often faced a court-martial for even minor mistreatment of non-combatants.

Despite the air raids and their shrinking territory outside their home islands, the Japanese fought on. Their warrior code did not allow for surrender, and soldiers and civilians alike often chose suicide rather than giving up. By July 1945, the Americans were launching more than 1200 bombing sorties a week against Japan. The bombing had killed more than a quarter million (about 2.50 lacs) and left more than nine million homeless. Still, the Japanese gave no indication of surrender as the Americans prepared to invade the home islands.

While the air attacks and plans for a land invasion continued in the Pacific, a top-secret project back in the United States was coming to fruition. On July 16, 1945, the Manhattan Engineer District successfully carried out history’s first atomic explosion. When President Harry Truman learned of the successful experiment, he remarked in his diary, “It seems to be the most terrible thing ever discovered, but it can be made the most useful.”

Truman realized that the “most terrible thing” could shorten the war and prevent as many as a million Allied casualties, as well as untold Japanese deaths, by preventing a ground invasion of Japan. On July 27, the United States issued an ultimatum: surrender or the U.S. would drop a “super weapon.” But Japan refused. In the early morning hours of August 6, 1945, a B-29 Superfortress Bomber named Enola Gay piloted by Lieutenant Colonel Paul Tibbets lifted off from Tinian Island in the Marianas. Aboard was a single atomic bomb weighing 8,000 pounds and containing the destructive power of 12.5 kilotons of TNT. Tibbets headed his plane towards Hiroshima, selected as the primary target because of its military bases and industrial areas. It also had not yet been bombed to any extent, so it would have provided an excellent evaluation of the bomb’s destructive power.

At 8:15 A.M., the Enola Gay dropped the device called “Little Boy.” A short time later, Tibbets noted, “A bright light filled the plane. We turned back to look at Hiroshima. The city was hidden by that awful cloud … boiling up, mushrooming.” The immediate impact of Little Boy killed at least 70,000 Hiroshima residents. Some estimates claim three times that number but exact figures are impossible to calculate because the blast destroyed all of the city’s records.

Truman again demanded that Japan surrender. After three days when there was no response, a B-29 took off again from Tinian with an even larger atomic bomb aboard. When the crew found their primary target of Kokura obscured by clouds, they turned towards their secondary target, Nagasaki. At 11:02 A.M. on August 9, 1945, they dropped the atomic device known as “Fat Man” that destroyed most of the city and killed more than 60,000 of its inhabitants.

Conventional bombing raids were also conducted against other Japanese cities on August 9, and five days later, 800 B-29s raided across the country. On August 15 (Tokyo time), the Japanese finally accepted unconditional surrender. World War II was over.

Much debate has occurred since the atomic bombings. While some evidence indicates that the Japanese were considering surrender, but far more information indicates otherwise. Apparently the Japanese were planning to train civilians to use rifles and spears to join the military in resisting a land invasion. Protesters of the Atomic bombings ignore the conventional incendiaries dropped on Tokyo and Dresden that claimed more casualties. Some historians even note that the losses at Hiroshima and Nagasaki were far fewer than the anticipated Japanese casualties from an invasion and continued conventional bombing.

Whatever the debate, there can be no doubt that the dropping of the atomic bombs on Japan shortened the war. The strikes against Hiroshima and Nagasaki are the only air battles that directly affected the outcome of a conflict. Air warfare, both before and since, has merely supplemented ground fighting. As confirmed by the recent Allied bombing of Iraq in Desert Storm and in Bosnia, air attacks can harass and make life miserable for civilian population, but battles and wars continue to be decided by ground forces.

In addition to hastening the end of the war with Japan, the development and use of the atomic bomb provided the United States with unmatched military superiority—at least for a brief time, until the Soviet Union exploded their own atomic device. The two superpowers then began competitive advancements in nuclear weaponry that brought the world to the edge of destruction. Only tentative treaties and the threat of mutual total destruction kept nuclear arms harnessed, producing the Cold War period in which the U.S., along with the USSR, worked out their differences through conventional means.