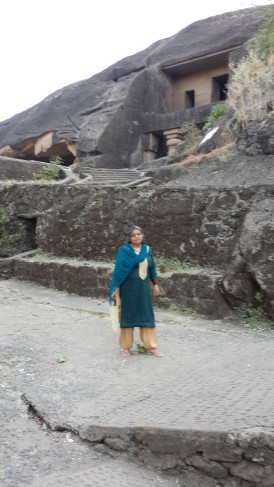 Some may not know that Kaneri caves are neatly nestled inside the SGNP (Sanjay Gandhi National Park) in the Borivali region of Mumbai which is now a high end residential area of Mumbai. Mumbai has this characteristics of springing up surprises. In the past we saw the population of big cats rising in and around SGNP when every else in India it is was only going down, and in the same breath one finds these beautiful hand crafted caves in the midst of the concrete jungles and the financial capital of India–Mumbai. Mumbai otherwise is all about the great Indian Corporate Inc. On my two earlier postings I never could find time to visit these lovely creations even when we were staying close to SGNP in Kandivali where I have a flat. But, better late than never; this time we managed to visit the caves during a short holiday around the new-year while visiting our daughter-in-law and son. It was quite a breath taking view as we parked our car in the morning amidst the lush green surroundings of the SGNP just two km before the caves and started walking.

Before the merger of the seven-isles after the land reclamation during the 19th and 20th century this area was known as Saksette island. It happens to be one of the most populated islands of the world. It is bounded by Vasai Creek in the north; Ulhas-river in the north-east; Thane Creek and Bombay Harbour in the east and the great Arabian Sea in the south and west.

A Cluster of Rock Cut Monuments

There is lot’s to see and assimilate in the Kaneri Caves that has a rich Buddhist legacy (Incidentally there are approx 50 crore Buddhists in the world today and it is the fourth largest religion in terms of adherents); and one goes spellbound as you go in and around the caves. A meticulous count revealed there are about 34 unfinished paintings of Buddha within the caves. Since we had gone in winters and that too in the morning, there was a certain nip in the air as we enjoyed the morning sun arching up. Apart from the paintings one should also see the ‘Vihara’ (The prayer hall) and the various different monasteries around the cave for a satiating fill of the ancient and historic Buddhist occupation and life.

And if you’ve had enough of history in your lifetime and are now looking for some fun and excitement then plan your trip accordingly that may include adventure sports such as rappelling, trapeze and treks around the fascinating lush green jungles of SGNP or the Silondha Trail that can be arranged by local tourist guides. The hilly terrain of the caves naturally creates several small waterfalls which are beautiful to watch especially during monsoon. Natural streams and rivers around the Kaneri Caves presents a stunning view of the area and exquisite locations for families to group and enjoy a small picnic while sightseeing the caves.

Being a Buddhist site, Kaneri could not have avoided its comparison with the other famous sites like Ellora, Ajanta and Nasik. Scholars have tried in the past to establish some kind of relationship between these Buddhist centers. Ellora has clear evidences suggesting the influence of Vajrayana Buddhism in later periods. Presence of female companions with Avalokiteshvara on few sculptures at Kaneri instigated scholars to suggest Vajrayana influence over Kaneri. Dulari Qureshi is among the recent ones to advocate this hypothesis. However, Debala Mitra is not in full support of it as he mentions that though we find female divinities in company of Bodhisattvas however full-fledged deities of the typical Vajrayana pantheon like those of Ellora are absent at Kaneri.

Water System at Kanheri – It is a fact that almost all visitors of early 19th and 20th century appreciated the water system of this cave complex. Dr. Suraj Pandit writes that Kaneri had developed its own peculiarities like a well-developed water system, its own agricultural land, satellite settlements and resources for subsistence. There are water-cisterns provided at the entrance of almost each cave at Kaneri. An inscription also mentions the construction of a dam, of course to maintain the water resources.

Most of the caves are located at the southern hill. To support water supply to all these caves, five water tanks were constructed. Most of the cisterns are connected to these tanks and each other with a network of small channels. On the eastern hill, there is a place known as Gomukh where natural spring water was collected. It seems that the inhabitants tried their best to utilize every drop of rain water, states Dr Pandit. His study of water management system at Kaneri provides a glimpse of changes and restorations of rain water harvesting techniques spanning across a millennium.

While returning from Kaneri I had one thought in mind: Many of the things that the world claims to have developed in the contemporary were already there in India—Indic civilisation. So does it mean the entire Indic civilization degenerated post those times?

There are no places to shop inside the SGNP. There are a number of local eateries outside the SGNP. Borivali and Malad stations are the closest disembarkation.