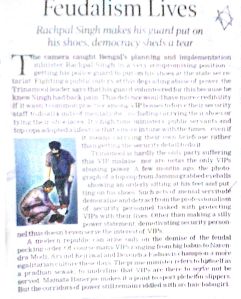 Sardar Rachpal Singh, also minister for Planning and Implementation in government of Bengal forgot at his convenience, Guru Nanak’s all time relevant teachings; so also the umbilical and noble duties that a Sikh is supposed to perform in a Gurudwara by allowing his security guard to tie his shoe laces. And, further shamed the martial race by hiding behind a measly back pain, the reason why he allowed the security guard to tie his shoe laces, when Sikhs are known for their unimaginable pain enduring capacities.

But let me also point out as to why security personnel posted along Netas, VVIPs and bureaucrats are getting into such a demeaning form of Chamchagiri? Why can’t they refuse on the face of these VVIPs as this is not part of their job?