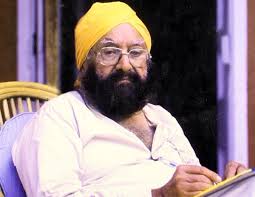 Khushwant Singh (born Khushal Singh, 2 February 1915 – 20 March 2014) was an Indian author, lawyer, diplomat, journalist and politician and. His experience in the 1947 Partition of India inspired him to write ‘Train to Pakistan’ in 1956 (made into a film in 1998), which became his most well-known novel. He is one of the prime English authors of India.

Born in Punjab, Khushwant Singh was educated in New Delhi, and studied law at St, Stephen’s College, Delhi, and King’s College London. After working as a lawyer in Lahore Court for eight years, he joined the Indian Foreign Service upon Independence of India from British Empire in 1947. He was appointed journalist in the All India Radio in 1951, and then moved to the Department of Mass Communications in UNESCO at Paris in 1956. His last two careers encouraged him to pursue a literary career. As a writer, he was best known for his trenchant secularism, humour, sarcasm and an abiding love of poetry. His comparisons of social and behaviour characteristics of Westerners and Indians are laced with acid wit. He served as the editor of several literary and news magazines, as well as two newspapers, through the 1970s and 1980s. Between, 1980-1986 he served as Member of Parliament in Rajya Sabha, the upper house of the Parliament of India.

Khushwant Singh was bestowed with Padma Bhushan in 1974. But he returned the award in 1984 as a protest against Operation Blue Star in which the Indian Army raided Darbar Sahab in Amritsar. In 2007 he was awarded the Padma Vibhushan, the second-highest civilian award of India.

Khushwant Singh was born in Hadali, Khushab District, Punjab (which now lies in Pakistan), into a Sikh family. He was the younger son of Sir Sobha Singh and Veeran Bai. Since births and deaths were not recorded in those times, his father simply made up 2 February 1915 for his school enrolment at Modern School, New Delhi. But his grandmother Lakshmi Bai asserted that he was born in August, so he later set the date for himself as 15 August. Sobha Singh was a prominent builder in Lutyens Delhi. His uncle Sardar Ujjal Singh (1895–1983) was previously Governor of Punjab and Tamil Nadu.

His birth name, given by his grandmother, was Khushal Singh (meaning a “Prosperous Lion”). He was called by a pet name “Shalee”. At school his name earned him ridicule as other boys would mock at him with an expression, “Shalee Shoolie, Bagh dee Moolee” (meaning, “This shalee or shoolee is the radish of some garden.”) He chose Khushwant so that it rhymes with his elder brother’s name Bhagwant. (He declared that his new name was “self-manufactured and meaningless”. But he later discovered that there was a Hindu physician with the same name, and the number subsequently increased).

He entered Delhi Modern School in 1920 and studied there till 1930. There he met his future wife, Kawal Malik, one year his junior. He continued higher education at Government College, Lahore, St. Stephen’s College Delhi, and King’s College London, before reading for the Bar at the Inner Temple.

Khushwant Singh started his professional career as a practising lawyer in 1939. He worked at Lahore Court for eight years. In 1947 he entered the Indian Foreign Service for the newly independent India. He started as Information Officer of the Government of India in Toronto, Canada. He was a Press Attaché and Public Officer for the Indian High Commission for four years in London and Ottawa. In 1951 he joined the All India Radio as a journalist. Between 1954 and 1956 he worked in Department of Mass Communication of the UNESCO at Paris. From 1956 he turned to editorial services. He founded and edited Yojana, an Indian government journal in 1951 -1953; and also The Illustrated Weekly of India, a newsweekly; and two major Indian newspapers, The National Herald and the Hindustan Times. During his tenure, The Illustrated Weekly became India’s pre-eminent newsweekly, with its circulation raising from 65,000 to 400000. After working for nine years in the weekly, on 25 July 1978, a week before he was to retire, the management asked Singh to leave “with immediate effect”. A new editor was installed the same day. After Singh’s departure, the weekly suffered a huge drop in readership. In 2016 Khushwant Singh entered Limca Book of Records as a tribute.

From 1980 to 1986, Singh was a member of Rajya Sabha, the upper house of the Indian parliament. He was awarded Padma Bhushan in 1974 for his service to the country. In 1984, he returned the award in protest against the siege of the Golden Temple by the Indian Army. In 2007, the Indian government awarded Khushwant Singh the Padma Vibhushan. As a public figure, Khushwant Singh was accused of favouring the ruling Congress Party, especially during the reign of Indira Gandhi. He was derisively called an ‘establishment liberal’. Singh’s faith in the Indian political system was shaken by the anti-Sikh riots that followed Indira Gandhi’s assassination, in which major Congress politicians are alleged to be involved; but he remained resolutely positive on the promise of Indian democracy and worked via Citizen’s Justice Committee floated by H.S. Phoolka a senior advocate of Delhi High Court.

Singh was a votary of greater diplomatic relations with Israel at a time when India did not want to displease Arab nations where thousands of Indians found employment. He visited Israel in the 1970s and was impressed by its progress.

Khushwant Singh was married to Kawal Malik. Malik was his childhood friend who had moved to London earlier. They met again when he studied law at King’s College London, and soon got married. They had a son, named Rahul Singh, and a daughter, named Mala. His wife predeceased him in 2001. Actress Amrita Singh is the daughter of his brother Daljit Singh’s son – Shavinder Singh and Rukhsana Sultana. He stayed in “Sujan Singh Park”, near Khan Market New Delhi, Delhi’s first apartment complex, built by his father in 1945, and named after his grandfather. His grandniece Tisca Chopra is a noted TV and Film Actress.

Khushwant Singh was a self-proclaimed agnostic, as the title of his 2011 book suggests: ‘Agnostic Khushwant: There is no God explicitly revealed.’ He was particularly against organised religion. He was evidently inclined towards atheism, as he once said, “One can be a saintly person without believing in God and also a detestable villain while believing in him. In my personalised religion, There Is No God!” He also once said, “I don’t believe in rebirth or in reincarnation, in the day of judgement or in heaven or hell. I accept the finality of death.” His last book, ‘The Good, The Bad and The Ridiculous’ was published in October 2013, following which he retired from writing. The book was his continued critique of religion and especially its practice in India, including the critique of the clergy and the priests. It earned a lot of acclaim in India.

Singh died of natural causes on 20 March 2014 at his Delhi residence, at the age of 99. His death was mourned by many including the President, Vice-President and Prime Minister of India. He is survived by his son and daughter. He was cremated at Lodhi Crematorium in Delhi at 4 in the afternoon of the same day. During his lifetime, Khushwant Singh was keen on burial because he believed that with a burial we give back to the earth what we have taken. He had requested the management of Bahai Faith if he could be buried in their cemetery. After initial agreement, they had proposed some conditions which were unacceptable to Singh, and hence the idea was later abandoned. He was born in Hadali, Khushab District,  in the Punjab Province of modern Pakistan, in 1915. According to his wishes, some of his ashes were brought and scattered in Hadali.

In 1943 he had already written his own obituary, included in his collection of short stories Posthumous. Under the headline “Sardar Khushwant Singh Dead”, the text reads:

We regret to announce the sudden death of Sardar Khushwant Singh at 6 pm last evening. He leaves behind a young widow, two infant children and a large number of friends and admirers. Amongst those who called at the late sardar’s residence were the PA to the chief justice, several ministers, and judges of the high court.

He also prepared an epitaph for himself, which runs as follows:

Here lies one who spared neither man nor God;
Waste not your tears on him, he was a sod;
Writing nasty things he regarded as great fun;
Thank the Lord he is dead, this son of a gun.

He was cremated and his ashes are buried in Hadali school, where a plaque is placed bearing the inscription:

A SIKH, A SCHOLAR AND A SON OF HADALI (Punjab)
‘This is where my roots are. I have nourished them with tears of nostalgia.