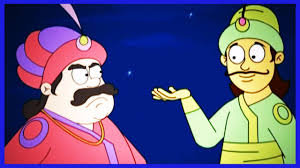 Once on a cold winter day, Akbar and Birbal were passing through a lake. Akbar stopped for a moment and put his finger into the freezing water and immediately took it out, saying, “I don’t think anyone can sustain a night in this cold water”. Birbal, took that, as a challenge, and said, that he would find someone who could do that. Akbar promised a sum of 1000 gold coins, to whosoever, who could spend a night, standing in the cold water of the lake. Soon, Birbal found a poor man who agreed to undertake the challenge for the 1000 gold coins. Guarded by two royal guards, the poor man spent the entire night standing in the freezing water.

In the morning, the poor man was taken to court for the reward. Upon being asked by the king how he could stand in the freezing water, the man replied, “My lord, I kept looking at a lamp that was burning at a distance, and spent my entire night looking at it”. On learning this, the emperor said, “This man is not worthy of the reward as he could manage to stand in the lake only because he was getting warmth from the lamp”. The poor man felt doomed and heart-broken, and he reached Birbal for help. Birbal didn’t go to the court the next day. Akbar visited Birbal to find the reason. To his amusement, the king found Birbal sitting beside the fire with a pot hanging almost 6 feet above it. On being enquired, Birbal said, “I am cooking khichadi, my lord”. Akbar started laughing and said that is impossible. Birbal said, “It is possible My Lord—just as the poor man who can stay warm by simply looking at the lamp burning at a distance, I can cook this khichadi in the same manner.” Akbar understood Birbal’s point, and rewarded the poor man for the challenge.